There are three main types of Forex charts that traders use:

In Forex trading, most traders use candlestick charts. However, I will go through each type of chart as you may have a different preference.

A line chart is made up of a series of dos connected by a line.

Line charts are very basic and they don’t provide a trader with much information. This is largely why most traders don’t use line charts.

There are some advanced applications for line charts in price action. You will learn about these later on though!

In Forex, a bar chart is made up of a series of bars. These bars give us some useful information. They show the opening and closing price as well as the high and low for the lifetime of the bar. The top of the bar is the highest point that price reached, whilst the bottom shows the lowest price. The dash on the left shows the price that the bar opened at and the dash on the right shows the price that the bar closed at. Bar charts are sometimes known as OHCL charts (Open, High, Close, Low) As you can see, bar charts give us much more information than the line chart.

Many traders find that bar charts aren’t too easy on the eyes. This is especially so when you zoom out and see a lot of bars at once. It can be quite hard to analyse a currency pair if the chart is visually difficult to assess. This is where candlestick charts come in!

Candlestick charting come from ancient Japan. They were used by Japanese rice trades to keep track of changes in the price of rice! 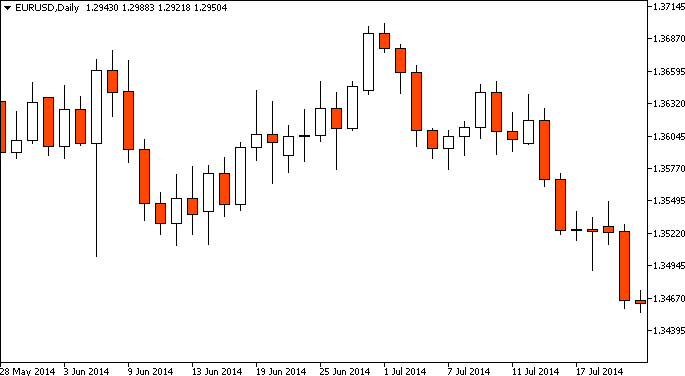 Candlesticks have bodies unlike bars. The top and bottom of the candlestick’s body are where price opened and closed. The “wicks” on either end are the high and low points that price reached during the candlestick’s lifetime. The different coloured bodies represent whether the candle has moved up or down. 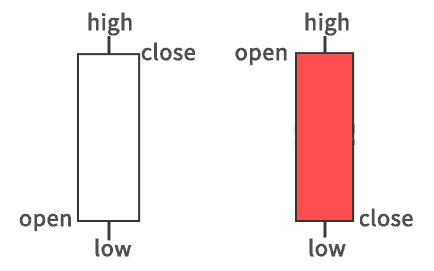